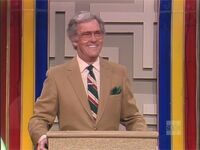 Tom Kennedy (born James Edward Narz) February 26, 1927- October 7, 2020 was a television game show host who had his greatest fame in the 1960s and 1970s. He is the younger brother of the late television host Jack Narz and the brother-in-law of the late Bill Cullen, and changed his name to avoid confusion prior to hosting his first national show, The Big Game, in 1958. Tom was a celebrity guest in 1979, but he replaced Allen Ludden as host late in 1980. Allen passed away the following year. Tom remained on the show until 1982, when it was cancelled.

Retrieved from "https://password.fandom.com/wiki/Tom_Kennedy?oldid=4360"
Community content is available under CC-BY-SA unless otherwise noted.