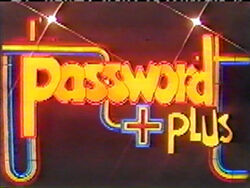 Password Plus premiered on NBC on January 8, 1979, running until March 26, 1982. There were 801 episodes produced, one of which remained unaired until Game Show Network came along in 1994. It was hosted by Allen Ludden, Bill Cullen (who filled in for Allen for a month in the spring of 1980) and Tom Kennedy, who replaced Allen late in 1980 and remained until the program was cancelled in 1982. Password Plus, like the ABC revival of Password, won a Daytime Emmy Award for Outstanding Game Show.

In the main game, contestants & celebrities solved puzzles with five clues each. They earned a chance to solve the puzzle by playing Password, and the passwords were the clues to the puzzles.

In 1981 after Tom Kennedy took over, major changes took place. A third $100 round came into effect, and then after that, the two contestants switched partners by walking in front of the playing desk (a nod to the original Password). This was called "the crossover." Now, $500 wins the game.

The winner of the game won a chance to play Alphabetics to try to win more money.

Retrieved from "https://password.fandom.com/wiki/Password_Plus?oldid=4282"
Community content is available under CC-BY-SA unless otherwise noted.