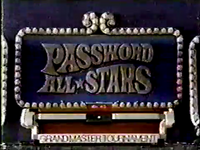 On November 18, 1974, the format changed to have celebrities play the game but without contestants. Six celebrities played for one whole week, all playing for charity. In this version, celebrities earned points scored by the winning team they were on. The top four celebrities returned to play Friday's game with the winning celebrity getting $5,000 plus a chance to play the Grandmaster Tournament for $25,000 more. This format was hated by fans of the show, so it was discontinued on February 21, 1975.

The main game began with an elimination round with four celebrities seated across from two other celebrities. The celebrities took turns giving one word clues to the other celebrities, and the first to buzz-in with the correct password scored one point. An incorrect answer from the buzz-in celeb caused him/her to sit out the rest of the word, and questioning about the clue after buzzing in ended the word right away. The first two celebs to score two passwords won the right to play Classic Password.

Classic Password was played the same as before, except that the clue giver on the first team was also given the option to double in addition to the pass/play option. Going for the double meant that the word would then be worth 20 points instead of 10; plus, both clue givers got one chance to get their partners to say the word.

Retrieved from "https://password.fandom.com/wiki/Password_All-Stars?oldid=4203"
Community content is available under CC-BY-SA unless otherwise noted.