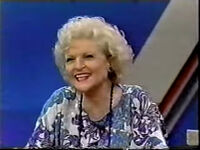 Betty Marion White Ludden (born January 30, 1922, in Oak Park, IL) was the wife of Allen Ludden. She met him while doing Password. At first she refused to marry Allen, but eventually gave in and finally married him. Betty became a widow when Allen died of cancer on June 9, 1981.

Retrieved from "https://password.fandom.com/wiki/Betty_White?oldid=4272"
Community content is available under CC-BY-SA unless otherwise noted.