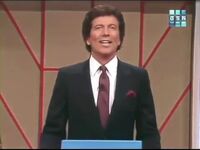 Bernard Whalen Convy (July 23, 1933–July 15, 1991) was an American actor and game show host. He hosted three game shows in his career plus one as a sub in 1968. Bert was also active in movies, one of which was a TV movie called The Man in the Santa Claus Suit produced by fellow personality Dick Clark. His first taste of game show hosting was in 1968 when he subbed for Bud Collyer on To Tell the Truth. In 1974, Bert was asked by Goodson-Todman to host a new version of Joe Garagiola's He Said She Said called TattleTales which he hosted for a span of ten years. Later he hosted the fifth version of the venerable Password, Super Password. While he was hosting it, he created & hosted Win, Lose or Draw in syndication for the first years until he got laid off and wound up hosting his second & final creation 3rd Degree bumping off pilot host Peter Marshall who sued because of it. He was supposed to host a new version of Match Game, but he later fell ill with brain cancer; so the job went to late night talk show host Ross Shafer, who previously hosted Love Me Love Me Not.

Bert was married twice: to Anne Anderson, with whom he had three children; and to Catherine Hills, whom he wed five months prior to his July 1991 death from brain cancer at age 57. Bert's daughter Jennifer also has been involved in television, moderating shows on Home and Garden Television (HGTV). His youngest son, Jonah Convy, is also involved in show business. His eldest son, Joshua Convy, is an accountant. He is buried at Forest Lawn – Hollywood Hills Cemetery.

Retrieved from "https://password.fandom.com/wiki/Bert_Convy?oldid=4322"
Community content is available under CC-BY-SA unless otherwise noted.